Father, developer, fun maker. Occasionally all at the same time.

I'm working on a new game, Kim Jong Eat. The premise of the game is that the player is in an alternate world where all wars and international conflicts are settled through eating competition. The player plays as Kim Jong Un and their quest to eat their way to world domination. In some ways I'd like this to parody Street Fighter 2's flying around the globe to battles, while also being a 1v1 fighting game, though without any actual combat.

This initial image spawned the idea: 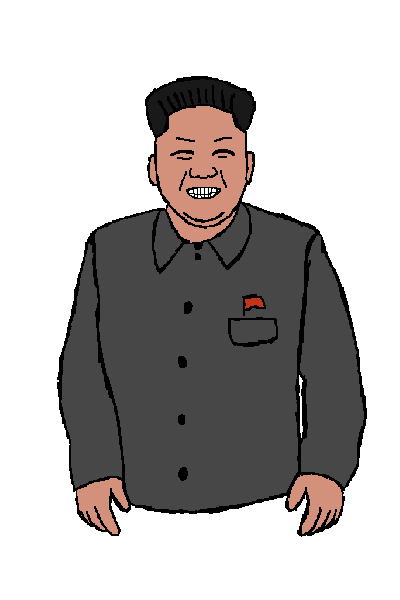 It's an art style I can replicate easily and fairly quickly as a non-artist. I made an initial animation trying to show off some eating [KimJongEatAnim.gif]. I already seem some problems with it though. The lead-up to the "bite" is way too long and should be snappier. The cool down should be what takes time.

I have some ideas for a single player mode where you learn some basic abilities and get better at eating certain types of good, deep fried, pasta, meats, veggies, whatever. Maybe even something can come in later where you get power-ups of some sort to pick the dishes. Maybe have multiple rounds, or multiple courses (entree, main course, dessert). It's still a work in progress and needs some design elements fleshed out.